Millions of people swallowed an 'E' last night ...
and the criminal gangs behind the trade are counting the profits this morning 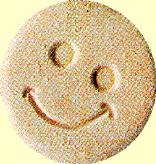 The eight drums impounded at Frankfurt airport were meant to contain acetone bound for a reputable Hamburg chemicals company. The exporter's papers were in order and the customs officials, who had regularly processed similar shipments in the past, saw nothing suspicious.

But German intelligence agents had been tracking the consignment for weeks and knew otherwise: the drums contained 452 kgs of piperonyl methyl ketone (PMK), better known as a synthesised derivative of the sassafras tree whose bark is used to make aromatherapy oils; better known as a banned insecticide in the US; and even better known as the raw material for MDMA, the chemical name for the dance drug ecstasy.

While the German agents could afford themselves a pat on the back, they knew the find was small beer. Intelligence sources suggest 100 tonnes of PMK are smuggled into the European Union every year - enough to make 100 million tablets.

All of which is good news for someone like Jimmy who has been dealing drugs for more than 13 years - right from the time ecstasy hit Britain's club culture to the current day, when it has become the illicit substance of choice for the twentysomethings who pop millions of pills each week. In his time as a dealer Jimmy has seen the price of pills plunge dramatically. 'In 1990 a dealer would buy around 1,000 pills for between £6 and £7 each. Today you're paying between 40p and 70p a pill,' he says. Just like any other mass market product, ecstasy is subject to the laws of supply and demand, and prices have tumbled as production of the synthetic drug has moved from a cottage industry to a sophisticated, industrialised global business that is worth billions of pounds.

What the dealers have lost in terms of margins they have more than made up for in volume as clubbers consume the increasingly poor quality drug in ever greater numbers to achieve the desired effect. In the Eighties most of the tablets in circulation contained pure MDMA. Today nearly half of all tablets on sale contain no MDMA at all, and those that do have had the dosage reduced to such a level that some clubbers routinely take four or five tablets each night. According to Jimmy that means there is still good profit to be had from dealing ecstasy, which is now affordable to those on even the tightest budgets.

Jimmy might not know it but these days he is effectively a salesman for the Triads, the Chinese gangs which have all but cornered the market in the production of the raw materials needed to make ecstasy and cleverly exploited China's burgeoning trade relationships with other countries to distribute the chemicals around the world.

Today a handful of Chinese chemical companies are practically the only firms to produce PMK, ostensibly for use in the perfume industry. These firms benefit from the fact that China is the world's biggest producer of sassafras oil, way ahead of its nearest rivals, Brazil and Vietnam, whose supplies are thought to be diminishing.

But apart from perfume, PMK has few legal uses: these days almost all of it is used to produce ecstasy and other synthetic drugs. US Drug Enforcement officials have become so alarmed at PMK shipments that they have practically banned the chemical from being imported into the country. Such was their concern that two years ago they signed a resolution with the European Union to crack down and monitor PMK shipments.

Yet this has had little if any effect. Triad gangs have created a series of front companies to buy the chemical and ship it on to ecstasy factories around the world, giving them profit rates of up to 3,000 per cent. Numerous internet sites market the chemicals to eager importers in places as diverse as Mexico, Indonesia and Europe.

Many of the factories or 'kitchen laboratories', as the smaller ecstasy production centres are known, have been based in Belgium and the Netherlands while a handful have sprung up in the UK, centred on Liverpool. And in recent years intelligence agencies have tracked many factories to Eastern Europe where they benefit from lax monitoring and cheaper production facilities.

A basic ecstasy lab - consisting of heaters, distillation flasks and funnels with access to running water, electricity and a waste pipe - can easily be built in the average toilet. Apparatus costing around £4,000 can be used to turn out several thousand pills a week. Labs are often packed up in the back of vans and moved from one location to another every few weeks in order to stay one step ahead of the authorities.

The factories are often backed by Israeli- and Russian-organised crime syndicates who then ship the finished product on to Eastern Europe, Asia and North America, where it has become hugely popular among 18- to 20-year-olds - so much so that they prefer it to cocaine and cannabis.

In Britain a massive, hugely lucrative industry has developed, dedicated to bringing vast quantities of ecstasy across the Channel. By a combination of day trippers, fast speedboats and sophisticated concealments, millions of tablets are smuggled into the country to satisfy the ever growing demand.

A United Nations report published last week paints an astonishing picture of just how big the industry, now producing 125 tonnes of ecstasy a year, has become in only a decade. The UN estimates eight million people in the world now take ecstasy, a rise of 70 per cent on five years ago. The combined ecstasy and amphetamines market is worth $65 billion a year, and more people consume so-called designer drugs than heroin and cocaine combined.

Part of the problem facing law enforcement agencies is that unlike cocaine or heroin, ecstasy is produced and consumed within the same region, making it much more difficult to track.

'The danger posed by synthetic drugs is advancing relentlessly,' the report noted. 'Access to chemicals, growing demand, corrupt officials, poor law enforcement, lack of extradition and/or light sentencing... has led to a greater involvement of criminal groups with ruthless forms of marketing.'

Less than 1kg of ecstasy sold to dealers will pay for a small-scale pill factory. Increasingly, though, the crime gangs are looking to scale up their operations. The UN has detected a rise in the number of ecstasy factories capable of producing up to 100 kg of the drug each week. This is enough to make a million ecstasy pills, or four per cent of the global weekly demand - a demand which shows no signs of slowing down.

Early hours in a popular men-only gay club in central London finds the dance floor heaving with sweat-drenched bodies. All ages, walks of life and looks are represented - the uniting factor is the widespread use of ecstasy. Nowhere is the phenomenal rise of the drug more apparent than on the gay scene where it is considered an almost essential part of any night out. 'Basically, pretty much everyone here is on it,' says Patrick, 32, a regular at the club. 'Some people are going off it and getting into ketamine instead, but that's a completely different kind of buzz. If you've been out the night before and you want to carry on here, then E is what you need. I've only been taking it for the last year. I used to be a bit scared but when you see that everyone else is doing it and having a good time, you think "why not?". I usually club together with friends to buy a batch so we know we're all taking the same stuff, having the same experience.'

The steady stream of media scare stories highlighting the supposed dangers of ecstasy has little effect on Patrick. 'When I started it was just half a tablet or maybe one. Then as I got braver I just started taking more and more. Now I've realised there is no point in taking more than four tablets in a night - partly because I can't really afford it and party because you don't get any extra benefit from it, especially if you're in a bad mood to start off with - all it does is make you feel normal. I tried not to get too carried away though: I know I'm basically putting a poison in my brain and I worry about the long-term effects.

'The short-term ones are worrying too. I don't like the hangover. If I have a big weekend I can get really tearful on the Tuesday or Wednesday for no reason, or I get really snappy. But not everyone thinks like that. It's so cheap now that some people are downing them like there's no tomorrow.' Some experts say the rise in ecstasy production has led to fatal results. Last week medical experts at St George's Hospital Medical School in London linked the rise in the number of UK ecstasy deaths to the falling price of the drug, which in turn has led to increased consumption. There were 12 deaths in 1996. Last year there were 72. One in six people who died had not taken any other drug.

'This clears up the debate once and for all - ecstasy alone can kill,' said Dr Fabrizio Schifano, who conducted the study.

The figures make grim reading but they should be put in context. Drug counsellors point out that most people who died after taking ecstasy had also consumed a number of other drugs including amphetamine, alcohol, cocaine and heroin.

'People will self medicate to obtain a desired effect. So they might do an E and then take an opiate when coming down,' said Harry Shapiro of Drugscope.

Shapiro said the rise of polydrug consumption meant the Government needed a new approach to drugs awareness campaigns. 'Different drugs are not taken by discrete groups of people who just do this or that,' Shapiro said.

The rise in deaths also needs to be set against the number of pills in circulation. According to the National Criminal Intelligence Service, up to two million ecstasy tablets are consumed in the UK each week. And NCIS admits this may be a conservative figure. Other statistics appear to confirm this fear. Figures from the UN suggest that at the start of the Nineties, one per cent of the UK population consumed ecstasy. By last year the figure had more than doubled to 2.2 per cent.

It is a trend that is likely to continue as ecstasy production continues to soar and prices fall. Antonia Maria Costa, executive director of the UN's Office on Drugs and Crime, says: 'Designer technology gives young people the false promise of becoming (briefly) "master of the universe". Law enforcement alone cannot control this. Since these changes are global, society as a whole needs to share the responsibility of reducing both demand and supply.'

But with an ecstasy pill now costing less than a pint of lager this conclusion is too little, too late.