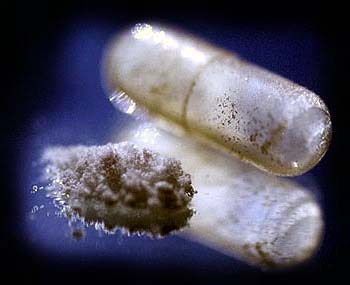 Authorities say that in the 1990s, a group of men at the federal prison in Terminal Island in Los Angeles hatched an ambitious goal for when they got out of becoming the country's biggest producers of Ecstasy, a club drug.

Using a lengthy business plan complete with charts and spreadsheets, they set up an Escondido factory capable of producing 1.5 million tablets worth $8 million a month, prosecutors said.

When the ring was busted, the Drug Enforcement Administration called it one of the most sophisticated Ecstasy labs ever found in the United States and agents arrested 24 people linked to the enterprise.

Last Thursday, the business partners who led the group were both sentenced in San Diego federal court to 30 years in prison and ordered to forfeit $354,000 cash seized during the investigation.

Dennis Alba, 55, of Carlsbad was convicted July 18, 2003, of organizing and leading a continuing criminal enterprise and conspiracy to manufacture Ecstasy and launder drug proceeds.

Mark Forrester, 52, of Escondido was convicted that same day of conspiracy to manufacture Ecstasy.

Ecstasy sells for $10 to $20 a tablet on the street, according to the DEA.

The ringleaders traveled widely in setting up the operation. They went to Sweden and met with an Ecstasy manufacturer and recruited the Texas man who wrote the book on illicit drug manufacturing. Three books, actually.

And they talked to a Mexican drug lord and toyed with the idea of setting up their factory in Tecate, prosecutors said.

Instead, they decided to go on their own because the cartel's cut would eat into their profits, authorities said.

They first set up their laboratory in Hemet but, when a "cook" who was to make the Ecstasy brought his girlfriend by, that location was compromised. They built their next laboratory inside a 40-foot shipping container hidden in an Escondido industrial park.

The only access was through a false bookcase in an Internet pornography business. The door could only be opened with a latch hidden inside a plastic box of drill bits that looked as if it was simply sitting on a shelf.

They spoke in code, used encryption in their computer communications and made sure that the chemicals they used – legal for other purposes – were not all delivered to the same place.

But federal, state and local authorities, tipped off about suspicious chemical deliveries, were on to them for over a year.

The investigators talked to informants, listened to 35,000 phone calls and watched thousands of hours of videotape from cameras mounted on poles and secretly installed inside the business.

When agents from the DEA and other agencies raided the illicit laboratory and related properties on Oct. 18, 2001, they found 7,500 Ecstasy tablets, hundreds of pounds of chemicals and $350,000 cash.

A defense lawyer said sophisticated labs are rare here because the drug is mostly made in Europe where there are far fewer regulations.

Alba's defense lawyer didn't dispute that Alba had set up the factory but instead challenged the way the investigation was conducted.

After the sentencing, defense lawyer Michael Crowley still criticized federal officials for watching as his client got more and more involved in the Ecstasy manufacturing process.

"They knew Mr. Alba had ordered chemicals," he said. "They allowed it to go on when they could have stopped it."

Prosecutor Todd Robinson said it would have been difficult to prove that Alba was bent on making Ecstasy just because he purchased some chemicals.

"Nor would we have been able to identify all the other co-conspirators," he said. "We would not have been aware of his business plan to manufacture 440 kilos of Ecstasy per month."

Alba and Forrester are the last of the defendants arrested in the drug-manufacturing ring to be sentenced. A Swedish chemist remains at large.

The two men were imprisoned together at Terminal Island in the 1990s for other drug convictions. Alba's criminal history dates at least to 1982, according to court records; Forrester's to 1975.

Agents were on to the operation in 2000, when Forrester flew to Stockholm, Sweden, to meet with an Ecstasy manufacturer, according to court records. Agents tailed Forrester onto the flight and saw him talking with the Swede and carrying chemistry books.

Members of the group used the Swede's recipe to make Ecstasy, prosecutors said.

Reaching out to "El Chapo"

As agents listened to wiretapped conversations, group members talked in February 2001 about setting up a lab in Tecate and visits with Joaquin "El Chapo" Guzman Loera, identified by the DEA as the head of the Sinaloa drug cartel.

In a business plan seized from Alba's computer, the cartel is referred to as a "joint venture partner."

Guzman was indicted in the United States 10 years ago in connection with a 1993 tunnel near the Otay Mesa border crossing. He escaped from a maximum security prison in Mexico in January 2001.

But Alba and Forrester abandoned that plan because the cartel wanted too much money, a DEA agent said in court documents.

Crowley, the defense lawyer, said in an interview that the ties to organized crime were blown out of proportion.

"They went down there to try to find a location," he said. "It was a one-day thing."

After setting shop in Escondido, the ring bought the 40-foot container, the kind used to ship merchandise across oceans and continents on ships, trains and trucks, and installed it in the Patton Industrial Park in space rented by Infobase Direct Marketing.

Replete with a studio and computer servers, the business operated pornographic Web sites. Prosecutors say the business was a front. Crowley said it was profitable.

The container was hidden behind newly built walls and was equipped with a ventilation system to keep neighboring businesses from smelling the chemicals through the walls.

And it was accessible only through the bookcase door.

Agents listened in on wiretaps as the drug makers spoke in code about getting equipment. On May 7, agents recorded Forrester talking with an associate about getting "three nice glass shirts and a new long-handle toothbrush for his shaving kit."

The "shirts" were actually laboratory equipment and the toothbrush was a reference to a brush used to clean glassware, according to the DEA agent's court filing.

The process sometimes broke down. At one point, a chemical reaction went on too long and yielded a solid that gummed up some equipment.

But the biggest problem they had was efficiency, according investigators. They weren't making enough Ecstasy to make a profit, and they needed to tweak the chemistry to increase their yields.

As they refined the process, they relied on Hobart Huson, who wrote three books on drug manufacturing under the pseudonym "Strike," to supply some of their chemicals.

Until pleading guilty in this case in 2003, Huson claimed his company, Science Alliance, was a legitimate business. He was sentenced in San Diego federal court to eight years in prison for his part in the conspiracy.

The ring also relied on a Monterey County man to press the powder they produced into pills that looked like aspirin tablets.

A small homemade machine, the size of a home sewing machine, produced 90 tablets a minute.

Crowley, the defense lawyer, asked for a reduced sentence by saying that the business was failing, calling the business plan a fantasy.

"They were dismantling the lab at the time the arrest came down," he explained outside court. "The process was not working."

"This clearly was a very sophisticated, clandestine operation," Whelan said during the sentencing hearing.

The long sentences, he said, were warranted because of both men's criminal past and their roles in setting up their factory.